While everyone is still talking about Philipp Plein’s most recent show at Fashion Week in New York, I can’t help but think back a couple of years ago when I had the chance to work on the 2017 Plein Sport campaign in Milan. Philipp Plein was assembling a group of models and bloggers and I was thrilled to be a part of the campaign!

By the time I was selected as one of the models I was no stranger to the Philipp Plein’s brand of luxury workout apparel. In fact, I had gone shopping at his store in Beverly Hills many times. I was a huge fan of his soft, edgy mixes of Swarovski skulls and brightly colored prints.

So, back in November 2016, I boarded a flight to Italy for my three-day Plein Sport shoot. Finally, after a 14-hour flight from Los Angeles to the beautiful city of Milan, I picked up my bags from baggage claim.

It wasn’t long before my driver, who was holding a Plein Sport sign, took my bags and then whisked me off to the luxurious Bulgari Milano Hotel. After I checked into the hotel, Plein’s “glam squad” began preparing me for the first day of the shoot.

The first order of business was to get a spray tan so that I looked like I’d spent that last two weeks lounging on some beautiful Italian beach. Next up was my manicure and, in keeping with the soft and edgy feel of the Plein Sport theme shoot, my nails were done in a mix of neon pink and matte black. With my spray tan and nails finished, I headed back to my room so I could crawl into bed for a night of beauty sleep.

Day One
We kicked off our first day with an early-morning meeting at Philipp Plein’s new showroom and then headed over to Crossfit Navigli, the set of our first shoot. Initially, the models filmed interviews featuring Philipp’s favorite quotes in English and I did it in both English and German. Next, we moved on to the classic “Mirror Fun Run” shoot. If you’ve ever seen pictures or videos of a woman with perfect hair and makeup running on a treadmill, that was me! 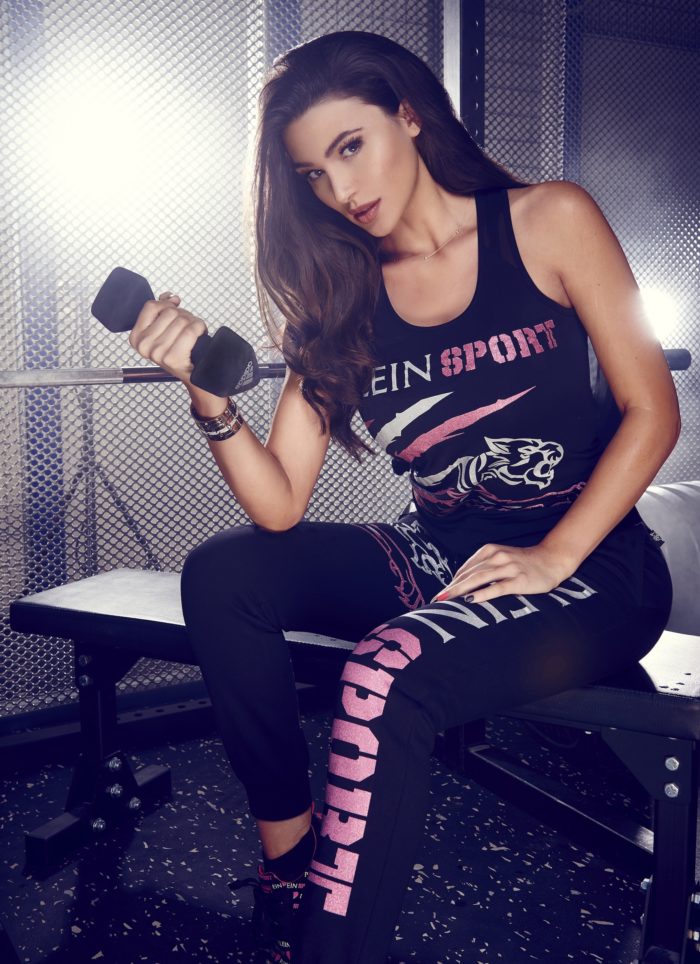 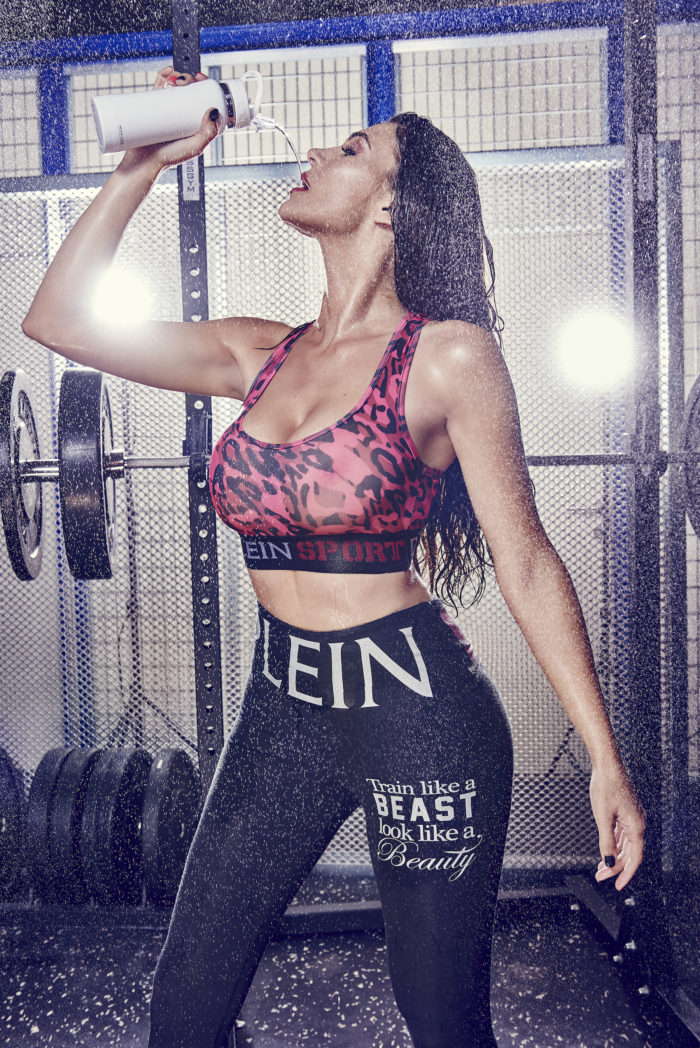 After wrapping up the first day of shooting, Philipp took the entire team out for dinner at Finger’s Garden, a delicious Japanese-Brazilian fusion restaurant. While at dinner I became fast friends with a fellow native Serbian,Sascha Lilic, the creative director for the 2017 campaign. From that night on, we spent the rest of the trip laughing and gossiping in Serbo-Croatian.

Day Two
I had a late call time on the second day so I went out to breakfast at the Bulgari Milano and then treated myself to a relaxing massage! I then headed back to the Crossfit Navigli to get my hair and makeup done in preparation for the shoot.

Sascha Lilic partnered me up with a few of the other girls and we crushed our gym scene before nailing our famous group shot. While we posed away, the Plein squad worked extra hard behind the scenes applying lotion, brushing my hair, and spraying “sweat (water)” onto my body. They took care of everything and made me look my best! 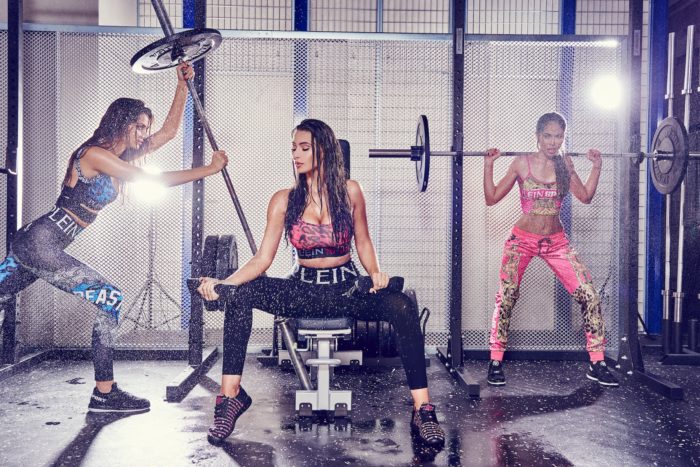 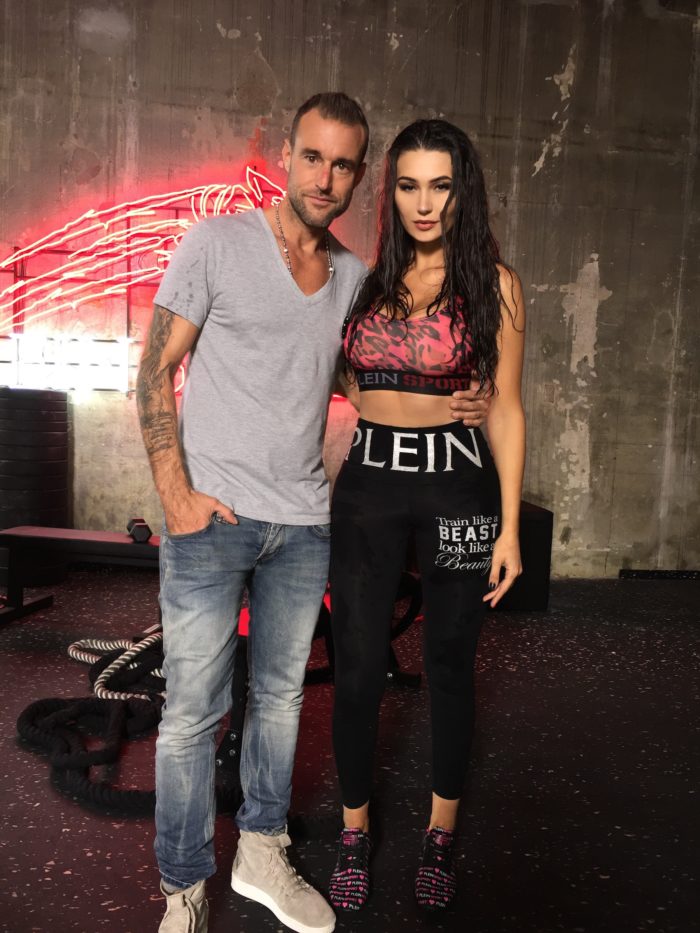 Later that night Phillipp and his team took us to designer Roberto Cavalli’s fashionable restaurant, Just Cavalli Milano. I spent the evening sitting across from Philipp and his beautiful Romanian girlfriend, Andreea Sasu. Seated to my left was Christoph Renschler, the producer of the Plein Sport campaign. We all quickly realized what a small world it was after discovering we shared a mutual friend, Alec Monopoly, a graffiti artist who was currently collaborating with Philipp on a clothing line. So, if you’re into dope, graffiti-styled designs, then check out Alec’s work!

After wonderful evening enjoying a delicious dinner and great conversation, Just Cavalli Milano suddenly morphed into a nightclub and we all started dancing! I spent most of the night dancing with Andreea, but eventually decided to leave the party early so I could get some sleep and look my best for the final day. I was very excited for the boxing scene shoot!

Day Three
I started my morning with quick breakfast and then headed out to Teatro Principe Milano, the boxing venue where we were shooting that day, to get my hair and makeup done. While the Plein glam squad always did an incredible job making me look my best, this new look featured boxer braids, which I absolutely adored!

After our final photo (and video) shoot I had an inspired idea! The “Mannequin Challenge” was really popular at the time so I convinced Philipp Plein and the rest of the team to shoot our own mannequin scene on set inside the boxing ring. What we thought was going to just be a fun little video, it became a web sensation and ended up going viral! 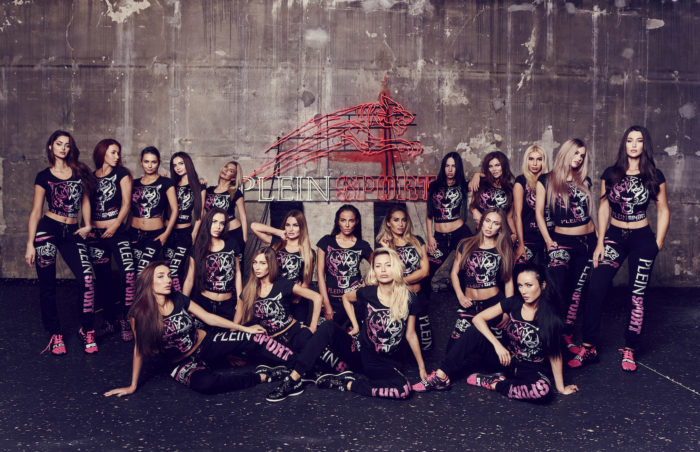 While I was a bit sad when the shoot ended, I was still happy to have had such an amazing experience. Philipp Plein and his production team was an absolute pleasure to work with and of the 20 girls chosen for the 2017 campaign, only two were chosen from the U.S and I was one of them. I also felt very lucky to have met an incredible group of bloggers and models from around the world. Those three days brought a lifetime of memories and I hope you’ll enjoy the exclusive behind the scenes videos of some of the shoots I’ll be posting on YouTube.

More Milan
While my work for Plein Sport ended that day, my vacation in Milan was not quite finished! There was no way that I was going home without doing some more sightseeing.

I set out with my fellow model (and LA friend) Mahlagha to check out a few of the sights. From the Bulgari Milano, we took a ten-minute walk to the beautiful Milan Cathedral. Located in the heart of Milan, it’s almost impossible to miss this beautifully gothic-styled church.

After the Cathedral, we headed to the shops at the Grand Galleria. If you’re looking to save a buck, this is probably not the place for you! There are a ton of high-end stores like Prada and Versace but it was still really fun to window shop our way through the crowds.

From the Grand Galleria we decided to make our way back to the hotel, but not before walking through the Piazza del Duomo and Brera district. With beautiful architecture and scenery, these open spaces are teeming with an abundance of shops, restaurants, and bars.

These beautiful sites in Milan capped the perfect end to my mini-Italian vacation. From the early morning meetings with the Plein squad to the beautiful Milano landscape, there’s nothing I would change about this trip – I can’t wait to go back!!

See All in Fashion

There are no comments

Stay up to date