Even if you don’t live in Dallas you’ve probably heard about Katie Rogers aka the ‘Mermaid Hair’ girl, @MermaidHairXo. Believe it or not, women come from all over the world to visit Katie at her new one-stop glam shop called The Mermaid Sealon which opened in July.  So why are The Mermaid Sealon and the “Mermaid makers” so amazing?  Well, let me tell you, it’s because her “Sealon” boasts the thickest “2-gram strands” in the sea! 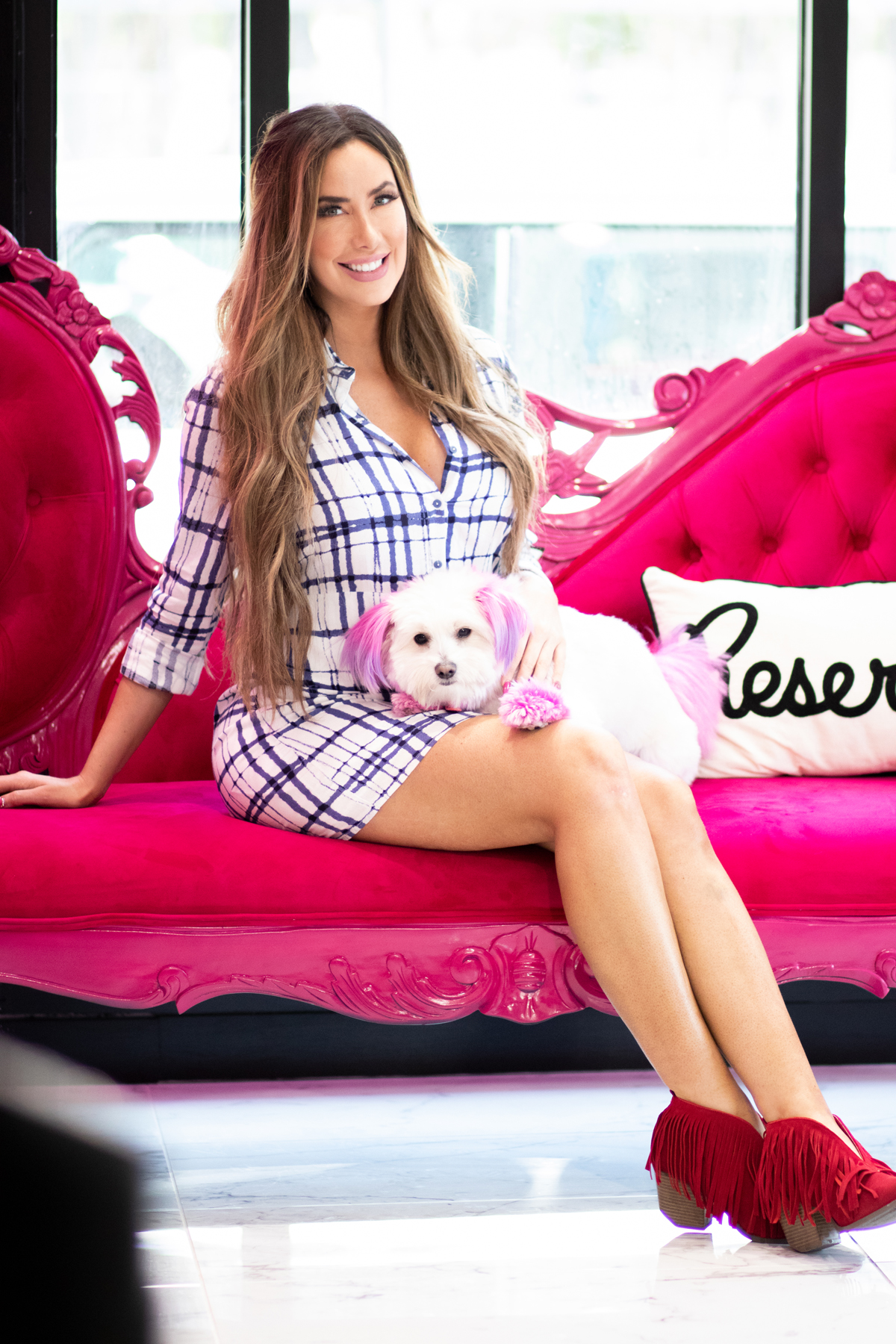 The Mermaid Sealon is the perfect place to get all your beauty fixes under one roof! Want beautiful, long, and thick hair? Maybe a spray tan that makes you look like you spent all summer in St. Tropez? Looking for a botox, lip filler or that stubborn double chin Kybella fix? How about a mani-pedi with fresh roses and mermaid tail bath bombs while you sip on a fancy cotton candy champagne drink? Celebrating something special in your life? Yes? Well… did you know that you can “Spin the Fin” and win cool prizes like a free maintenance that usually costs $200? Want a polaroid picture of your new set taken and pinned on Katie’s huge 15-foot neon hot pink map of the U.S.? When your iPhone pictures don’t do your selfie any justice, would you prefer to have Katie’s personal photographer take a professional “before and after” picture of your hair? If the answer is yes to all of the above, then you have come to the right place!

Katie has worked with Lilly Ghalichi, Chanel West Coast, Chelsea Houska, LeeAnne Locken from the Real Housewives of Dallas, and many more celebrities.

I remember meeting Katie for the first time 6 years ago during my “Mermaid Hair consultation” in her then famous #redchair era. She has always been so bubbly and full of positive energy. I remember having much shorter hair and walking out of the salon with gorgeous, long, and thick hair and feeling like a real life mermaid!  It’s so nice to have a friend that I have seen go from 1 chair to now having 19 employees work for her as she lives her best life and becomes her own boss at her very own Sealon! So, it was only natural to give this mermaid her very own interview, a first of many more I’ll be doing…

Before Mermaid Sealon 20-year-old Katie started working at Kinki Lounge in Dallas as a cocktail waitress. She said, “I wanted to marry someone really rich, but I knew they wouldn’t take me seriously if I didn’t go to college. So, when I was 18, I went to college for 2 weeks and I dropped out because I was like, this is not for me, this is hard, and there are no hot guys. So, I was over it!” Fast forward to 23-year-old Katie Rogers being a cocktail waitress, she looked around one night and noticed girls in the industry, who were getting closer to their 30s, were still doing the same thing they had for years. She told herself she didn’t want to be that girl.

So, Katie woke up one day and enrolled herself in Ogle Cosmetology school. She thought to herself, “this will be easy, I can do it, I can show whatever guy I’m dating that ‘oh yeah, I did something.’” She was going to night school for 2 years from 5pm to 9pm with her cocktail clothes in her car, heading to work right after school to make her 9:30pm shift at Kinki Lounge. Katie was getting A’s on all of her tests, understanding color formulas, and was so ahead of the curve that she became class president at the school.

Katie graduated and thought to herself, “I don’t need a man! I am the rich husband!” The day she graduated is the day she quit being a cocktail waitress. For the next three months, she was doing hair out of her living room. She knew she had a goal and told herself, “I will work my butt off, never go back no matter how hard things get because I don’t want to be the girl who failed!” She never wanted people to say, “Oh, she couldn’t do it, so she had to go back to bottle service.” There were days when she used to go through her couch looking for coins so she could buy something from Taco Bell for dinner.

The Evolution of Mermaid Hair

She ended up taking an extension class and learned the microbeads technique, which turned out to be the beginning and later evolved into “mermaid hair”. Katie was a quick learner, but she felt that the person who taught her didn’t use enough hair. He only went to the ear and down so it had that mullet-look everyone was rocking back then. Katie said to herself, “Nope! I’m not going to cut corners.” She wanted to add more hair on her clients and didn’t care if it meant dipping into her profits and spending extra money. She was more concerned about her clients looking good and walking out of the salon looking the way she would want to look. She started buying more hair and building her Instagram page with “before and after” pictures. As the girls looked like mermaids instead of Ursula to her, using the hashtag #MermaidHair seemed like a natural choice.

Quickly building her clientele, the next best move for her career was to start working at Studio 1514 as an assistant. While it was supposed to go on for a year, Katie ended up being an assistant for only thirty days. Three months into it, she got her first assistant Courtney, which was unheard of!  The guy she was assisting at the time said, “Everyone is calling and they want their hair done by the Mermaid Hair girl!” This is what gave her the idea to trademark Mermaid Hair by Katie Rogers.

A year into it, Katie started looking for thicker hair strands. The issue was that only so many beads can be placed to make the hair appear fuller but it still looked thin. She wanted thicker hair so she thought to herself, “what if we wind them together!? Wind two strands into one bead and see what happens… you get twice the hair at half the time. So, instead of having 300 beads in your head, you can do 150 really thick ones.” This is when Katie trademarked 2-gram strands which she could customize with highlight and lowlight blends. That moment was the beginning of “Mermaid Hair – the thickest hair in the Sea!”

Katie worked in the studio for three years where she made the #redchairselfie go viral. She always knew that there was a room in the back that was used for storage. One day, she went to the back to use the restroom and a lightbulb went off in her head. She asked Natalie, the owner, if she could have it as her very own “extension room” as she had already taken up three chairs with two assistants in the front room which was crowding everyone’s space.

Natalie told her she could have it, but that Katie would be accountable for all the renovation costs. Katie had the walls painted and furnished, after which the place was ready for business. The front was still used for colors and the back room was strictly used for extensions, which was huge! She had the back room for three years which helped her save money but she always knew that she eventually wanted to be a salon owner. Katie also knew that she didn’t want to have a business partner or an investor; she never wanted to ask anybody for their opinion on her vision. She knew she wanted to do this on her own because she wanted to inspire other people and tell them that they can do it on their own as well.

Katie started scouting out locations for Mermaid Sealon and consulted with more than a few realtors. Unfortunately, she couldn’t find the perfect location. Then one day Katie’s girlfriend, while receiving a spray tan, told Katie about her workplace – a nondescript two-storied white brick building where she was renting her room for commercial purposes.  She encouraged Katie to check the place out as she thought the space would be perfect for Katie. The next day, Katie came by and as soon as she arrived she knew – it was her new place; it was everything what she was wishing for just a week ago! 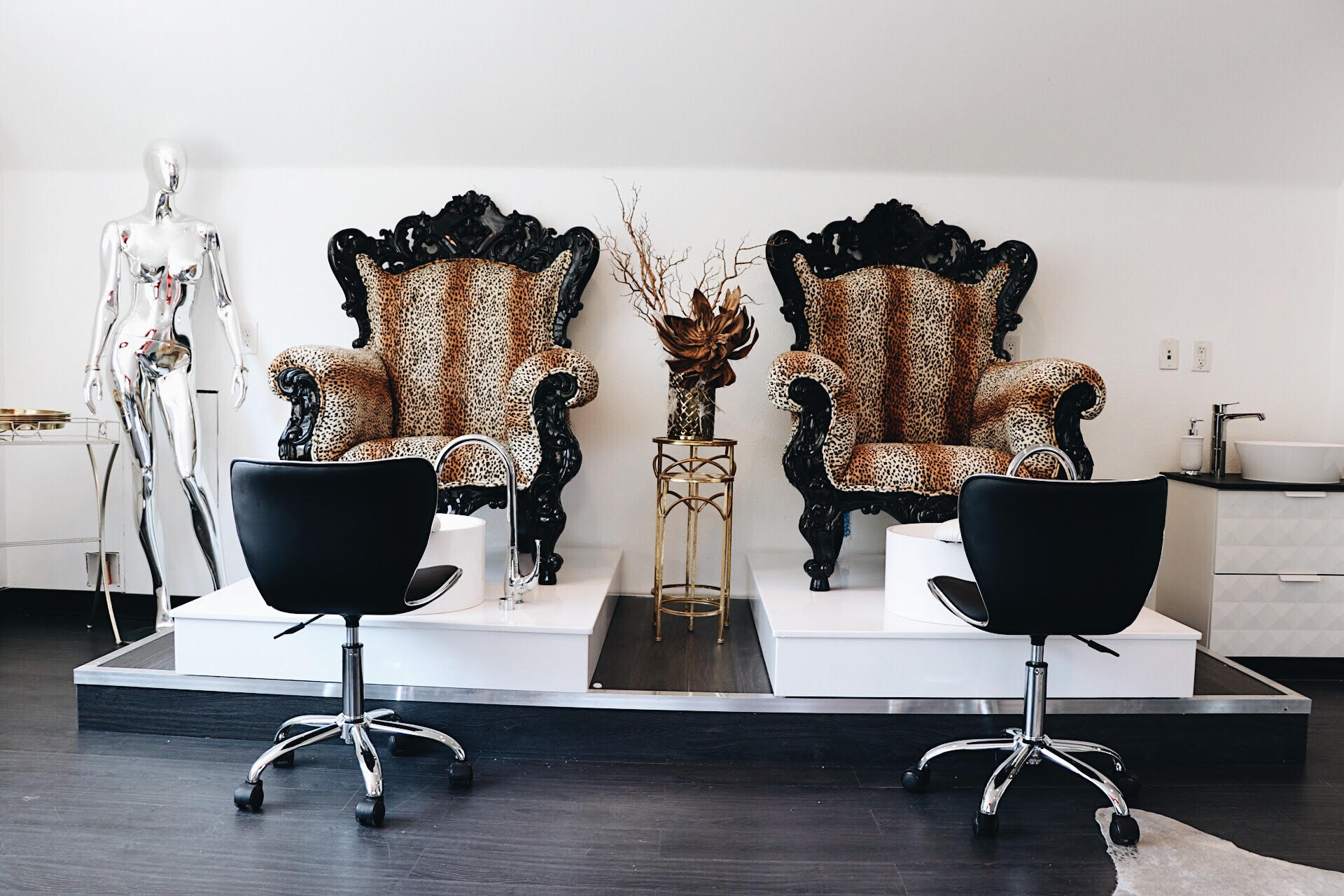 She started walking through the property, and ideas instantly started flowing on what wall she could knock out and where the various services would be performed.  Katie is not one to judge a book by its cover; and in her head she could picture The Mermaid Sealon, though she knew she would have to renovate the entire building in order to bring her vision to life.   She met the landlord, and went back and forth over the contract for three weeks until she was satisfied with it and finalized the deal.

Her friend Tommy, who knew Katie from her Kinki Lounge days, was a contractor and told her he would help her speed things up. So, she had 30 guys working day and night on the Mermaid Sealon and got everything renovated in three weeks time!  Katie had her videographer document the build out of Mermaid Sealon from beginning to end. She searched Pinterest for cute black brick building inspiration and found amazing ideas. So, black it was! Katie had all of her employees wear pink construction hats with paint buckets in their hands splashing black paint at the wall on the count of three – doing it together as a team.

When Katie traveled to Los Angeles, she noticed there were Angel Wings on Melrose Ave where everyone would stop and take pictures. Being the low-key marketing genius that she is, she knew she wanted to create a place where people could take selfies. So, she flew HG – Herbert Galarza – from Miami who had worked with Paris Hilton, Lil’ Wayne, Dave Grutman, and many more celebrities. She knew she didn’t want a sign on her building; she wanted a big shell with Swarovski crystals decorating the pearl. It took six hours to add all of the crystals alone!  This is where her clients could take #shelfies… With every last detail finally in place, the Mermaid Sealon officially opened on July 1st, 2018, and the rest is history.

Katie is truly the embodiment of the modern American women.  She is self-reliant, confident, and isn’t afraid to take risks.  She is sassy, sexy, and successful at whatever she puts her mind to.  She is an inspiration to all of us who know her, to use one of her favorite hashtags she is simply goals.

Interior design:
Katie collaborated with her girlfriend Nichola “Redoux Couture” to help bring her miniature glam wonderland vision to life. She trusted her because, in the past, Nichola had helped Katie with the interior design of her own place. Knowing Katie’s style is glam-couture, classy, and very extra made this process very easy.

Fun mermaid fact:
Mermaid hair is being made every day! Katie has five girls who make the hair and 250 students who are her mermaid makers from all over the world. The hair is from Malaysia and there is a distributor in Dallas.

See All in Beauty

Stay up to date